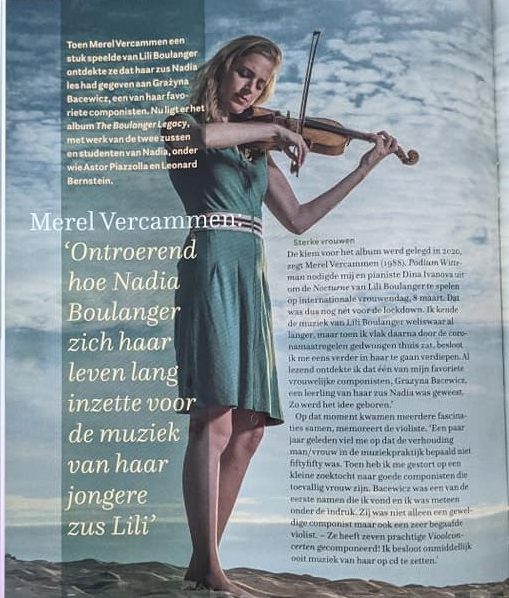 Merel was interviewed by Thea Derks on the new album. The interview appeared on print at “De Nieuwe Muze” magazine in The Netherlands last month, but has been translated as well. You can find the English version here.

The album also got raving reviews in Dutch newspapers:

Guido van Oorschot (De Volkskrant): “Vercammen and Ivanova play enviably well together. They find so many timbres, from viola-like depths to tenuous heights. It’s wonderful to hear how they turn frequently heard pieces into a compelling discourse.” ★★★★

Maarten Jan Dongelmans (De Gelderlander): “Together they manage to raise ensemble playing to a rare high level. With this duo, chamber music becomes a medium without fussiness or false vanity. Vercammen and Ivanova make music with their heart on their tongue so you as a listener are glued to the speakers. […] The music of Lili Boulanger sounds wonderfully lilting. Very sophisticated too. […] The two soloists hit the melancholy and sultry passion straight to the heart. […] This tastes like more, also because of the original and sustainable presentation, and certainly deserves to be awarded later this year.” ★★★★★

Peter van der Lint (Trouw): “A wonderful album […] Vercammen and Ivanova especially champion the Polish Grazyna Bacewicz with a poignant performance of her Third Violin Sonata. Bernstein’s Violin Sonata is a surprising youth work, played beautifully. And the fact that Piazzolla also studied with Nadia says something about her attraction. His Le Grand Tango certainly fits in this beautifully programmed and performed recital” ★★★★